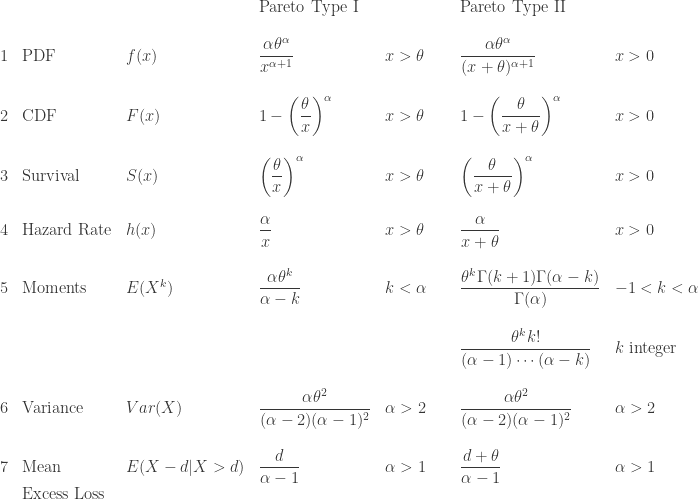 One item that is not indicated in the table is

for Pareto Type II, which is given below.

is the incomplete beta function, which is defined as follows:

The above table describes two distributions that are called Pareto (Type I and Type II Lomax). Each of them has two parameters –

(scale parameter). The support of Pareto Type I is the interval

. In other words, Pareto type I distribution can only take on real numbers greater than the scale parameter

. On the other hand, the support of Pareto Type II is the interval

. So a Pareto Type II distribution can take on any positive real numbers.

The two distributions are mathematically related. Judging from the PDF, it is clear that the PDF of Pareto Type II is the result of shifting Type I PDF to the left by the magnitude of

(the same can be said about the CDF and survival function). More specifically, let

. It is straightforward to verify that

has a Pareto Type II distribution, i.e. its CDF and other distributional quantities are the same as the ones shown in the above table under Pareto Type II. If having the same parameters, the two distributions are essentially the same, in that each one is the result of shifting the other one by the amount

A further indication that the two types are of the same distributional shape is that the variances are identical. Note that shifting a distribution to the left (or right) by a constant does not change the variance.

Since the two Pareto Types are the same distribution (except for the shifting), they share similar mathematical properties. For example, both distributions are heavy tailed distributions. In other words, they significantly put more probabilities on larger values. This point is discussed in more details below.

First, the calculations. The moments are determined by the integral

In the remaining discussion, the focus is on Pareto Type II calculations.

is definition the integral

th moment of the exponential distribution with gamma weight. The following shows the calculation.

In the above derivation, the conditional

is assumed to have an exponential distribution with mean

in turns has a gamma distribution with shape parameter

. The integrand in the integral in the second to the last step is a gamma density, making the value of the integral 1.0. When

can be simplified as indicated in row 5.

The next calculation is the mean excess loss. It is the conditional expected value

is an insurance loss and

is some kind of threshold (e.g. the deductible in an insurance policy that covers this loss), then

is the expected loss in excess of the threshold

given that the loss exceeds

is the lifetime of an individual, then

can be calculated by the integral

. This integral is not easy to evaluate when

is a Pareto Type II PDF. Fortunately, there is another way to handle this calculation. The key idea is that if

has a Pareto Type II distribution with parameters

(as described in the table), the conditional random variable

also has a Pareto Type II distribution, this time with parameters

. The mean of a Pareto Type II distribution is always the ratio of the scale parameter to the shape parameter less one. Thus the mean of

is as indicated in row 7 of the table.

is defined as follows.

, the insurance policy pays the loss in full. If the loss exceeds the cap

, the policy only pays for the loss up to the limit

is said to be the limited expectation. For Pareto Type II, the first moment

can be evaluated by the following integral.

Integrating using a change of variable

will yield the results in row 8a and row 8b in the table, i.e. the cases for

. A more interesting result is 8c, which is the

th moment of the variable

. The integral for this expectation can expressed using the incomplete beta function. The following evaluates the

is as indicated in 8c.

for a random variable

. Thus VaR is a fancy name for percentiles. Setting the Pareto Type II CDF equals to

gives the VaR indicated in row 9 of the table. In other words, solving the following equation for

The tail-value-at-risk of a random variable

at the security level

, is the expected value of

given that it exceeds

, the following integral gives the tail-value-at-risk for Pareto Type II. The integral is evaluated by the change of variable

Tail weight is a relative concept – distribution A has a heavier tail than distribution B. The first three points are ways to tell heavy tails without a reference distribution. Point number 4 is comparative.

Existence of moments
For a given random variable

, the existence of all moments

, for all positive integers

, indicates a light (right) tail for the distribution of

. The existence of positive moments exists only up to a certain value of a positive integer

is an indication that the distribution has a heavy right tail.

Note that the existence of the Pareto higher moments

is capped by the shape parameter

(both Type I and Type II). Thus if

does not exist for

. If the Pareto distribution is to model a random loss, and if the mean is infinite (when

), the risk is uninsurable! On the other hand, when

, the Pareto variance does not exist. This shows that for a heavy tailed distribution, the variance may not be a good measure of risk.

of a random variable

is defined as the ratio of the density function and the survival function.

will die in the next instant. The hazard rate is called the failure rate in reliability theory and can be interpreted as the rate that a machine will fail at the next instant given that it has been functioning for

units of time. It follows that the hazard rate of Pareto Type I is

for Type II. They are both decreasing function of

One key characteristic of hazard rate function is that it can generate the survival function.

Thus if the hazard rate function is decreasing in

, then the survival function will decay more slowly to zero. To see this, let

, which is called the cumulative hazard rate function. As indicated above, the survival function can be generated by

is decaying to zero much more slowly than

. Thus a decreasing hazard rate leads to a slower speed of decay to zero for the survival function (a point discussed below).

. The property owner buys an insurance policy with a deductible

if a loss occurs with

. The insuerer will pay nothing if the loss is below the deductible. Whenever a loss is above

, a function of the deductible

According to row 7 in the above table, the mean excess loss for Pareto Type I is

and for Type II is

. They are both increasing functions of the deductible

! This means that the larger the deductible, the larger the expected claim if such a large loss occurs! If a random loss is modeled by such a distribution, it is a catastrophic risk situation.

captures the probability of the tail of a distribution. If a distribution whose survival function decays slowly to zero (equivalently the cdf goes slowly to one), it is another indication that the distribution is heavy tailed. This point is touched on when discussing hazard rate function.

). The two survival functions are set to have the same 75th percentile, which is

. The following table is a comparison of the two survival functions. 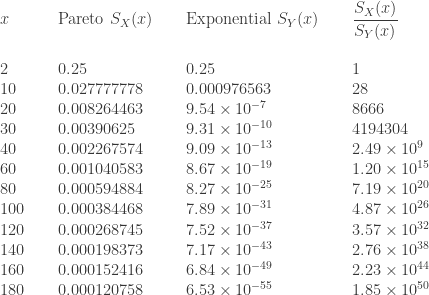 Note that at the large values, the Pareto right tails retain much more probabilities. This is also confirmed by the ratio of the two survival functions, with the ratio approaching infinity. If a random loss is a heavy tailed phenomenon that is described by the above Pareto survival function (

), then the above exponential survival function is woefully inadequate as a model for this phenomenon even though it may be a good model for describing the loss up to the 75th percentile. It is the large right tail that is problematic (and catastrophic)!

In the above ratio, the numerator has an exponential function with a positive quantity in the exponent, while the denominator has a polynomial in

. This ratio goes to infinity as

The Pareto distribution has many economic applications. Since it is a heavy tailed distribution, it is a good candidate for modeling income above a theoretical value and the distribution of insurance claims above a threshold value.