Suppose that the random variable

is the size of the loss (if a loss occurs). Under an insurance policy with a deductible

. The idea for this notation is that the insurance payment is

is not negative. The following describes the payment rule more explicitly.

. First and foremost, we need to know how much it will cost the insurer on average to pay the insured, which is the mean

is also important as it is a measure of risk to the insurer. The mean

can be calculated by using the density function of

. At times it will be useful to know the the probability density function (PDF) and cumulative distribution function (CDF) of

and other distributional quantities.

First, let’s focus on the moments of

. One way to obtain moments of

is through the distribution of the unmodified loss

be the probability density function (PDF), cumulative distribution function (CDF) and the survival function of the random loss, respectively. Then the moments of

can be expressed using these distributional quantities of

The above calculation is based on first principle. When the loss

is less than or equal to

, the insurance payment is zero. Note that the zero payment does not have to be explicitly stated in the above integrals. When the loss

, the amount of the loss in excess of

. Example 1 and Example 2 below demonstrate how this calculation is performed.

Another way to obtain the moments of

is obtained by first finding the PDF of

. This is discussed in a section below.

Example 1
Suppose that the loss distribution has PDF

. What is the expected amount of the loss eliminated as a result of imposing the ordinary deductible of 2 (eliminated from the insurer’s perspective)?

. Thus when a loss occurs, the expected amount of the loss that is responsible by the insured is

,which is also the expected amount of the loss eliminated (from the insurer’s perspective) as a result of imposing an ordinary deductible.

Example 2
Continue with Example 1. Calculate the variance of the insurance payment 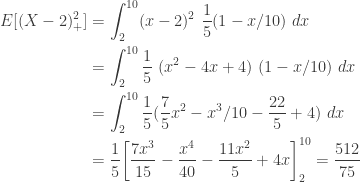 . This shows that imposing a deductible that is significant enough has a variance reducing effect on the insurance payment. Had the deductible not present, there would be a greater fluctuation in the payment.

The calculation in Example 1 and Example 2 are based on first principle. For many parametric families of distributions, the calculation for

can be done using formulas. To that end, consider summing the payment

Summing up each case produces the original loss

equals to full coverage. From a calculation standpoint,

can be computed as follows:

is routine for a large number of parametric families of distributions. For examples, most of the distributions in the table in this link have formulas for

for three distributions, taken from the table in the given link.

Examples are given to demonstrate how these formulas are used.

Example 3
You are given the following:

For the next loss that will occur, determine the expected amount that will be paid by the insurer.

As a result of imposing a deductible of 1000, the payment made by the insurer per loss goes from 250 to 173.611. The reduction of payment of

Example 4
You are given the following:

Determine the expected amount per loss that is paid by the insurer.

, which is the amount per loss that has to be met by the insured.

One observation about exponential loss. When the loss

is an exponential distribution,

can actually be directly calculated using first principle since the exponential distribution is very tractable mathematically.

Example 5
You are given the following:

Determine the expected amount per loss that is paid by the insurer.

PDF and CDF of Insurance Payment

The preceding section shows that

is a great way to evaluate mean claim cost per loss when the loss distribution is from this list of distributions. For the distributions in this list, the limited expectation

is readily available. To calculate the higher moments of

, it is helpful to know more about its distribution. To that end, we derive its PDF and CDF and the survival function.

Before deriving the PDF and CDF, note that the payment variable

is a censored and shifted random variable. It is censored from below and is shifted to the left by the amount of the deductible

. As far as payment is concerned, any loss that is below the deductible is considered zero. In effect, any loss in the interval

is recorded as zero. The insurance policy only pays for losses that are in excess of the deductible

. Hence the positive payments are derived by shifting losses in the interval

to the left by

. The resulting distribution for the payment

is a mixed random variable. It has a point mass at

is the CDF of the loss

or some appropriate interval

, the density curve of

to the left by the amount

be the PDF and CDF of

, respectively. The following is the PDF of

Note the point mass at

, which is the probability that the loss is less than or equal to the deductible. The curve

is the density curve

shifted to the left by the amount

. The following is the CDF and the survival function of

Now that we have a description of the model for

, moments and other distributional quantities can be derived. Consider the following two examples.

Example 6
You are given the following:

Determine the mean and variance of

The following shows the PDF, CDF and survival function of the loss

The point mass is

. The following is the PDF

Note that the PDF

is shifted to the interval

. The following gives the CDF and survival function of

can be can be obtained by integrating

Note that the variance of the unmodified loss is

. In this case, imposing a deductible of 4 reduces the variance by a little more than half.

Example 7
Consider the loss distribution and the coverage in Example 3. Determine the PDF, CDF and the survival function of

. Then find the mean and variance of

has a Pareto distribution with parameters

. The following shows its PDF, CDF and survival function.

The point mass is

. The following is the PDF

Note that the part for

. Thus the moments of

can be obtained by multiplying

with the moments of this new Pareto distribution. Since the point mass is for

To complete the example, the following gives the CDF and survival function.

Insurance Payment Per Loss versus Per Payment

is calculated over all losses (whether they are below or above the deductible). The expected value