Here’s the setting for the Poisson-gamma mixture. Suppose that

has a Poisson distribution with mean

(rate parameter). Then the following is the unconditional probability function of

The distribution described in (1) is one parametrization of the negative binomial distribution (derived here). It has two parameters

(coming from the gamma mixing weights). The following is another parametrization.

has a shape parameter

and a scale parameter

that is expressed using the gamma function. The next task is to simplify the ratio using a general notion of binomial coefficient.

The Poisson-gamma mixture is discussed in this blog post in a companion blog called Topics in Actuarial Modeling.

The familiar binomial coefficient is the following:

where the top number

is a positive integer and the bottom number

is a non-negative integer such that

. Other notations for binomial coefficient are

. The right hand side of the above expression can be simplified by canceling out

The expression in (4) is obtained by canceling out

does not have to be an integer for the calculation in (4) to work. The bottom number

has to be a non-negative number since

can be any positive real number as long as

is a positive real number and

is a non-negative integer such that

. The thought process is that the numerator is obtained by subtracting 1

, this thought process would not work. For convenience,

is a positive real number.

is a positive real number and

is a non-negative integer. We use a key fact about gamma function:

. Then for any integer

, we have the following derivation.

. Thus we have the following relation.

is an integer with

With relation (6), the two versions of Poisson-gamma mixture stated in (1) and (2) are restated as follows:

. In (8), the gamma distribution has shape parameter

. The following is a standalone version of the binomial distribution.

In (9), the negative binomial distribution has two parameters

. In this parmetrization, the parameter

is simply a real number between 0 and 1. It can be viewed as a probability. In fact, this is the case when the parameter

is an integer. Version (9) can be restated as follows when

In version (10), the parameters are

(a positive integer) and a real number

is an integer, the usual binomial coefficient appears in the probability function.

Version (10) has a natural interpretation. A Bernoulli trial is an random experiment that results in two distinct outcome – success or failure. Suppose that the probability of success is

in each trial. Perform a series of independent Bernoulli trials until exactly

is a fixed positive integer. Let the random variable

be the number of failures before the occurrence of the

th success. Then (10) is the probability function for the random variable

A special case of (10). When the parameter

is 1, the negative binomial distribution has a special name.

Suppose that the negative binomial distribution is that of version (8). The conditional random variable

has a Poisson distribution with mean

and the random variable

has a gamma distribution with a shape parameter

and a scale parameter

The following derives the mean and variance of

into the above mean and variance. For (9), let

. The following table lists the negative binomial mean and variance.

. Thus it can be used as a counting distribution, i.e. a model for the number of events of interest that occur at random. For example, the

described above can be a good model for the frequency of loss, i,e, the random variable of the number of losses, either arising from a portfolio of insureds or from a particular insured in a given period of time.

The Poisson-gamma model has a great deal of flexibility. Consider a large population of individual insureds. The number of losses (or claims) in a year for each insured has a Poisson distribution with mean

. From insured to insured, there is uncertainty in the mean annual claim frequency

. However, the random variable

varies according to a gamma distribution. As a result, the annual number of claims for an “average” insured or a randomly selected insured from the population will follow a negative binomial distribution.

We present two examples. More examples to come at the end of the post.

Example 1
For a given insured driver in a large portfolio of insured drivers, the number of collision claims in a year has a Poisson distribution with mean

follows a gamma distribution with mean 4 and variance 80. For a randomly selected insured driver from this portfolio,

The number of collision claims in a year is a Poisson-gamma mixture and thus is a negative binomial distribution. From the given gamma mean and variance, we can determine the parameters of the gamma distribution. In this example, we use the parametrization of (8). Expressing the gamma mean and variance in terms of the shape and scale parameters, we have

. These two equations give

. The probabilities are calculated based on (8).

The answer for the first question is

. The answer for the second question is

. Thus there is a closed to 65% chance that an insured driver has at most one claim in a year.

Example 2
For an automobile insurance company, the distribution of the annual number of claims for a policyholder chosen at random is modeled by a negative binomial distribution that is a Poisson-gamma mixture. The gamma distribution in the mixture has a shape parameters of

. What is the probability that a randomly selected policyholder has more than two claims in a year?

Since the gamma shape parameter is 1, the unconditional number of claims in a year is a geometric distribution with parameter

. The following is the desired probability.

. We introduce a recursive formula that allows us to compute the value

is known. The following is the form of the recursive formula.

are constants. Note that the formula (12) calculates probabilities

. It turns out that the initial probability

is determined by the constants

. Any discrete probability distribution that satisfies this recursive relation is said to be a member of the (a,b,0) class of distributions.

be defined as follows:

Let the initial probability be 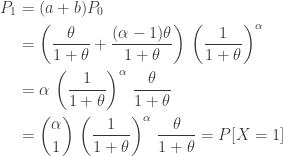 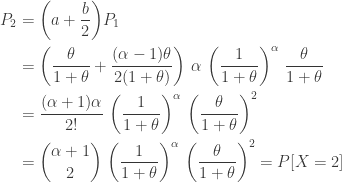 The above derivation demonstrates that formula (12) generates the same probabilities as (8). By adjusting the constants

should be defined as follows:

With the initial probability

, the recursive formula (12) will generate the same probabilities as those from version (9).

Example 3
Suppose that an insured will produce

claims during the next exposure period is

varies according to a distribution with the following density function:

What is the probability that a randomly selected insured will produce more than 2 claims during the next exposure period?

. The given density function for the parameter

is that of a gamma distribution with

. Thus the number of claims in an exposure period for a randomly selected (or “average” insured) will have a negative binomial distribution. In this case the parametrization (7) is the most useful one to use.

The following calculation gives the relevant probabilities to answer the question.

. There is a 19.42% chance that a randomly selected insured will have more than 2 claims in an exposure period.

Determine the proportion of insureds that are expected to have less than 1 claim in a year.

. This is an exponential distribution with mean 0.75. The problems asks for the proportion of insured with

. Thus the answer is

. Thus about 74% of the insured population are expected to have less than 1 claim in a year.

One thousand insureds are randomly selected and are to be observed for a year. Determine the number of selected insureds expected to have exactly 3 claims by the end of the one-year observed period.

The following gives the calculation for 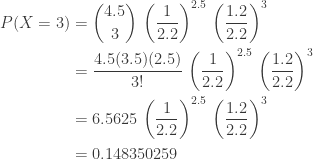 , about 149 of the randomly selected insureds will have 3 claims in the observed period.

Example 6
Suppose that the annual claims frequency for an insured in a large portfolio of insureds has a distribution that is in the (a,b,0) class. Let

be the probability that an insured has

claims in a year.

, determine the probability that an insured has no claims in a one-year period.

. Based on the recursive relation (12), we have the following two equations of

into the recursive relation gives the answer.