. The individual purchases an insurance coverage to cover this loss. If the policy pays the loss in full (if a loss occurs), then the expected insurance payment is mean loss

. Usually the expected insurance payment is less than

due to the presence of policy provisions such as a deductible and/or limit. This post is the first post in a series of posts in discussing the probability models of insurance payments.

In this post, we assume that the random loss

. The methodology can be adjusted to handle discrete loss variable (mostly replacing integrals with summation).

Suppose that the random variable

is the size of the loss (if a loss occurs). Under an insurance policy with a limit

, the insurer pays the loss in full if the loss

is less than the limit. Furthermore if the loss is

or greater, the insurance payment is capped at

. This is called the limited loss random variable.

be the probability density function (PDF), cumulative distribution function (CDF) and the survival function of the random loss, respectively.

The first integral is based on the definition of the limited loss variable, summing up the payments in the interval

and in the interval

. The second integral is an alternative way to evaluate the first integral (see here for more explanation). The following gives the second moment, which can be used in evaluating the variance of insurance payment.

Once again, the second moment is also expressed using the alternative calculation. The following two examples demonstrate the evaluation of the first two moments of

Example 1
Suppose that the loss distribution has PDF

The CDF of the loss 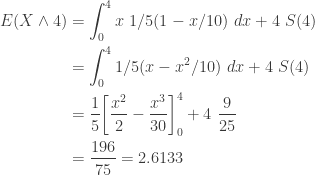 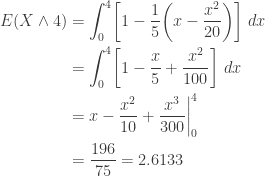 Example 2
Continue with Example 1. Calculate the variance of the insurance payment 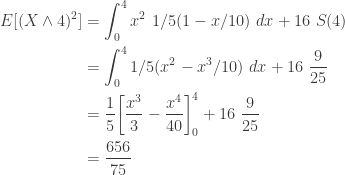 To compare, the variance of

The example demonstrates that policy provisions such as limit has a variance reducing effect. Had the insurer been liable to pay for the entire loss amount, there would be a greater fluctuation in the payment.

is an upper censored random variable. Any realized value of

above the limit is known only known as the limit

(as far as payment is concerned). On the other hand, applying a limit on the loss

into a mixed random variable. In the interval

is continuous while there is a point mass at the point

into censored or truncated variables. As a result, these variables are mixed random variables. The subsequent posts will further demonstrate this point.

For formulas for the higher moments, refer to the table. This table will be used throughout the discussion (in subsequent blog posts) on estimating insurance payments. Here’s some blog posts on these three distributions – exponential, Pareto and lognormal.

The following example shows how these formulas are used.

for the following loss distributions.

The exponential distribution with mean 1000 has parameter

(the scale parameter). The following gives the limited expected value.

The discussion here is just the beginning. The limited expected value

is for a simple policy provision, having just one modification of loss. It is a building block for other payments under more complicated insurance payment rules.